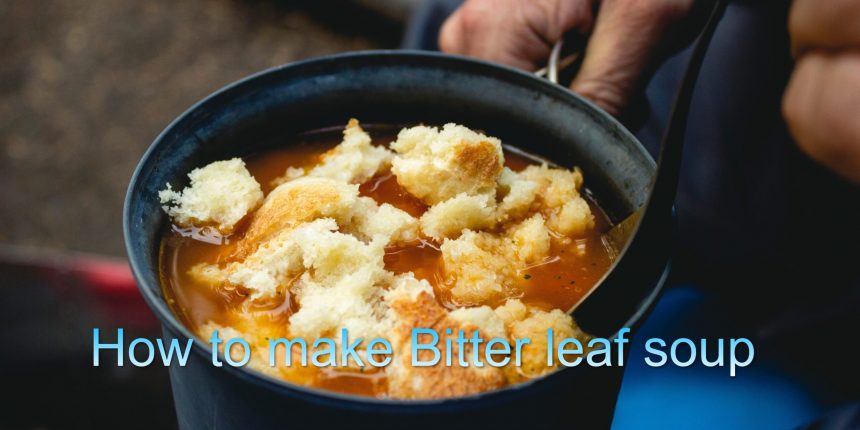 Definitely today I’m going to show you how to make own new soup also, popularly known as bitter leave soup now. This soup originates from the eastern part of Nigeria and it is mostly consumed by the people, all the tribes are actually falling in love with this dish as well.

one cup of shredded dried fish

one cup of shredded stock fish

one tablespoon of ground crawfish

some salt to taste.

Now over here on my gas cooker I already have my meats boiling and I just seasoned with some onions a little bit of pepper sauce and seasoning cubes and that’s all and it’s been cooking it’s totally and perfectly cooked now now the stock is going to form the base of this soup or the sticky bun enough for me so I’m going to add go ahead and add just one cup of water just to increase the base for me and then next up I will just go ahead and chop some fresh peppers.

I always like to cook my local sub sweet fresh peppers the red ones and the yellow ones, this one’s oh my gosh they add tons and taste. So your soup, you should try to inculcate this whenever you okay everything goes right into now. If you do not know, if you are too scared to actually chop this with your hands, you can actually just chop it all rather roughly chop it with your food processor or your blender that’s also okay.

Also Click here to read up more On this recipe.

I really don’t know what this new one is produced from but this day right here and labor. So whatever even look us up, you’re making so it goes right in.

It’s going to melt as the soup as this balls now the reason why I’m going to leave this to work for about five to eight Minutes so that the palm oil can just dissolve right into the liquid mixture and so that it doesn’t handle the tongue while you’re eating it.

You do not want to have that’s I don’t know it feels like a sloppy effect like when you think it is you it’s obvious that you’re eating some local dish when you burn it down for a while for over five to eight minutes you can have that effect on your tongue which it’s very important that I love it to boil for the five to eight minutes before you continue with the routine basis.

while this is pointing over here, I’m just going to come here about this bitterly right here now this you should be the hardest part of this soup for me and this usually like literally used to make me run away whenever my mom is making it but guess what guys, I realized that they actually sell the processed bitter leaf in the local market and women I’ve already realized that I was the happiest girl on earth.

So this one is actually from the market I party from the market and I actually tasted it to be sure that there was no more bitter taste a little bitter taste at all go back home and I just washed it with some hot water and on but I’m still going to further chop this because it’s really really looking so big and so large I don’t like the way it’s looking.

I’m going to just finally use my knife just for tonight, I’m on the chopping board and just the leaves are so hard and it’s only I think you sell the dry ones outside Nigeria because, Nigerian local market over there wherever you believe that you can, I think that’s what the big secret of this is okay. So it’s time to bring in the cocoyam, it was really soft I took out the skin and I placed it in a food processor and a lot of food processors do its work. If you don’t have a food processor so you can also use a blender just add a little water until the paste is formed.

If you don’t have a blender, you can use a mortar and a pestle and just pound it now if you don’t have a motor and the pestle they have the powdered cocoyam that you can just form into a pastry, add a little bit of water. It is sold in the market so that’s what you like, is up to you, This is too fresh for you and I always like it really fresh so I like the way it’s boiling and look at how the palm oil has mixed up with the liquid content.

My pots that’s exactly what she wants I’m just going to go ahead and throw in the cocoyam know the corium act as the big man for this circuit and this puts as it gently and and how thick you wanted also to be you can add more or less for you. It’s all exceeded what you add your hopefully arm and you realize that the liquid is smoothly okay and more.

I’m just going to give it some time about five minutes to dissolve completely into the liquid we’re going to touch it. It’s really simple naturally on its own and while this is happening, you can go ahead and wash up some stuff remember I said that it’s benefit it’s a clean up as you go as you cook it’s not waiting to you’re done with the cooking process before you cook, before you clean so as you make a mess.

I commit a mess now I’m heading over to the sink it’s just doing this out okay so you can see that the cocoyam is totally dissolved and it’s now so thick not so thank you it was to thicken up a little. So I’m going to proceed to put in some seasoned cubes and that’s possible taste and some crayfish you can make any Nigerian soup without adding crayfish. I think that’s it to tell, no and of course some chili pepper and I added fresh pepper before.

It’s all about hot and spicy in my kitchen and of course I have some dried puns doesn’t put in here as well just because I like the taste of it, doesn’t want me to put the dried prawns because it’s like it’s not so used to it and I tell you have a taste of this dish you understand why I decided to put some the dry products crack in the pots because I have some dried fish, some stock fishes, one about shredded sorry smoked fish that I’ve shredded.

You just want to, please leave some bits because I don’t overcrowd the cross and of course I have some fish as well is that all the components of my genome little soup cooking there’s no stop fish it is no smoked fish you haven’t started so stays meaning.

Then finally I’m just going to sprinkle a little bit of salt now this look is almost as good as done maybe just another spring and I’m gonna give it one stare it’s low to medium no sorry give it one good stare just combine already. I love the way  it looks and smells. So I’m just going to a lot of basics I cook for another three to five minutes then I’ll come back end so in the shredded.

I think not really cuz this tell see you want I want I like mine is lightly you’re anything like yours thicker you can actually allow it to cook up for another five minutes.

For five to seven minutes so that it becomes open or what I think this is the consistency that I got and it’s just perfect for me so what I’m going to do now is just go ahead and throw in all of my shredded it’s a leaf now a lot of people like to put a lot of bitter leaf to crowd the soup. what I really do not like to put so much better leaf.

I still wants to see that’s CP feel well that’s the people say but if you want to have so much bigger need in your soup you can go ahead and add so much more I think it’s actually fine already it or not so much what this is actually the bitter here is actually the star of the dish so it’s a leaf so natural or fake on you do okay just because in this stuff you just added it, you know I’m a tender-hearted able to take you.

So I’m just going to allow you to cook up for another two minutes and this one is as good as done okay so I’m giving this one – man don’t you like how it looks do you know what you guys are still weak he told me that this is the first dish that I’m making without using garlic I don’t know why since I use garlic for this bitter leaf dish.

Maybe next I’m gonna try it with garlic okay so this dish is as good as done the heat and then give it a little bit of a taste I already know how it’s gonna taste so but this is just for formalities hmm I wish I had some Eba right now, I’m going to go down this in a bit you want to join me because your family and your friends they will definitely love it